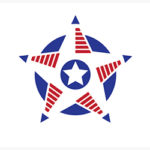 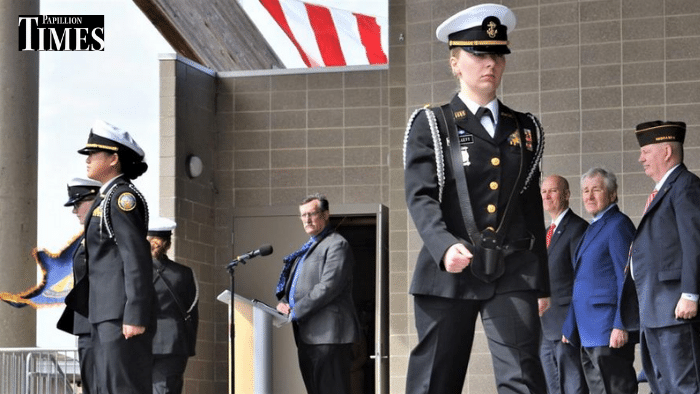 On a day that began blustery and cloudy, former U.S. Secretary of Defense and Nebraska native Chuck Hagel correlated the societal upheaval of that war with today’s ongoing national strife.

As the former Nebraska U.S. Senator gave his keynote address to an audience of 500, including veterans and active military members, dignitaries and citizens, brilliant sunlight broke through the clouds — almost on cue. America, he said, can self-correct.

“At a time in our country today, that’s as polarized and politically divided as I think I have seen in my lifetime — and the only time that was close was when my brother, Tom, and I were in Vietnam in 1968,” Hagel said.

“That year, we sent over 16,000 dead Americans home in one year as a result of that war. Martin Luther King was assassinated. Robert Kennedy was assassinated. Cities burned all over this country. This was a nation helplessly divided and polarized.

“We are at somewhat of a political and societal impasse today. But what memorials can do, and always have done, and will do as this one will do, is it unites people.

Hagel said whether a military conflict is perceived to be a noble purpose, like the Second World War, or has fallen into disfavor, “every war has had some factor, some feature, some dynamic, some purpose about freedom. Defending freedom. Defending people’s rights to believe the way they want to believe. It’s all mixed up in there.”

“We should always remember there is a difference between the war and the warrior. And we have come to terms with that over the years,” he said.

The Nebraska National Vietnam Memorial will be located on a hill just south of the amphitheater off 108th Street. It is a one-hour drive time for 65% of Nebraska’s residents, and situated between the Omaha National Cemetery and the Eastern Nebraska Veterans’ Home.

The two-acre site was donated and will be maintained by the City of Papillion. With views of the Omaha skyline and the Walnut Creek Recreation Area, Mayor David Black said it is “a great place for contemplation. Kind of a unique spot. Quiet. Reflective.”

“First, it’s a spiritual haven,” Hagel said. “It’s a place where people can come, to be quiet, to pray, to think about their loved ones. Not just those who lost their lives in the Vietnam War, but other veterans. Other veterans who served this country. Not necessarily in war, but just who served. It is a reminder that service is the essence of who America is.”

When complete, the memorial will feature 11 obelisks that will create a historical journey of the events of the Vietnam War. An honor wall will memorialize the 396 Nebraskans who lost their lives in the conflict. Flagpoles will feature the flags of the United States, the POW/MIA flag and the five branches of the U.S. Military. There will be benches and greenspace for people to gather.

A restored Vietnam-era UH-1 “Huey” helicopter will be part of a mixed-media sculptural depiction of the rescue of a wounded soldier. The helicopter is being cosmetically restored by aviation students at Iowa Western Community College in Council Bluffs, aided by personnel from Offutt Air Force Base. There are also Vietnam veterans volunteering to ensure authenticity.

Construction on the memorial will begin this month. It is scheduled to be complete by next year, and dedicated on National Vietnam War Veterans Day, March 29, 2023, recognizing the day the last U.S. combat troops left Vietnam 50 years earlier.

Vietnam Navy veteran George Abbott, the secretary/treasurer of the Nebraska Vietnam Veterans Memorial Foundation, said more than half of the funds have been raised for the $5.6 to $5.9 million project. Some financing is expected from the Nebraska Legislature via federal funding from the American Rescue Plan Act of 2021.

“We are hitting most of our targets, so we should be fully funded,” Abbott said.

In his remarks, Gov. Pete Ricketts spoke of the generosity of Nebraskans, both financially and in spirit.

“One of the things I love about Nebraska is that Nebraskans are patriotic,” Ricketts said. “They appreciate the service that the men and women who put on the uniform do for them.”

“All across this state, you’ll see memorials in parks where citizens have gathered together to raise the funds to be able to honor our veterans. And so we are doing that again for our Vietnam veterans. We want to recognize their sacrifices, and right that wrong from over half a century ago,” he said.

Reconciling the past harm done to many Vietnam veterans will require education, according to Terry Hester, President of the Vietnam Veterans of America Chapter 279 in Elkhorn.

“It’s time and past time to get it going,” Hester said. “Education for the younger generation that doesn’t know what we sacrificed for our country.”

In partnership with Bellevue University, the NVVMF has developed teacher lesson plans about Vietnam for students from third grade up to high school seniors.

Additionally, Bellevue University has created a companion website to augment the memorial. Strategically posted QR displays will link to an online repository of information, personal stories from veterans and tributes to the fallen.

“Young people, visitors and future generations will hear the authentic voices of those who fought and served during Vietnam,” Bellevue University President Mary Hawkins said.

According to the Department of Veterans Affairs, nine million Americans served during a 20-year period from 1955 to 1975. There were 58,220 lost, and more than 1,600 remain missing. There are approximately 7.2 million veterans of that era alive today, including 44,000 in Nebraska.

Mick Wagoner, an executive board member of the VVMF and the executive director and founder of the Veterans Legal Support Network, is a retired Marine lieutenant colonel who served in conflicts in Kuwait, Somalia, Afghanistan and Iraq. He told the audience of the contrasts between his returns home and those of the Vietnam veterans.

“I got all these times that people said ‘Thank you for your service’,” Wagoner said. “People welcomed me home — my family. Proudly wearing my uniform. Our Vietnam vets did not get that.

“They came home after a year of service, (people) said ‘take your uniform off, you don’t want to deal with the heat’ in San Francisco or the spitting on or the name calling in Sacramento. ‘You don’t want that’. So they took off their uniforms, put their gear in a gearbox and got on with life.

“That ends today, ladies and gentlemen, that ends today. Right over that hill is the Nebraska Vietnam Veterans Memorial, and it is for you,” he said.

Wagoner ended his speech with a request.

More about the Nebraska Vietnam Veterans Memorial can be found at www.NVVMF.org. A virtual tour memorial can be viewed at youtube.com/watch?v=tIojlxVQQMM.

If you have a question or are in need of legal assistance.